What is a Fungal Infection?

Friendly aerobic bacteria present in and on the body generally act to control the level of this yeast. This however can go out of balance when antibiotics are used or the environment locally favours the yeast.

Acidophilus is a common example that may become lacking due to dietary restrictions. Diabetics are particularly afflicted, as their above normal sugar levels can provide an over abundant food source for the yeast.

Silver and most compounds of silver have an oligodynamic effect or to put it another way an antiseptic effect, that is Colloidal Silver is an antibiotic, an antiviral and an anti-fungal all at the same time. Consequentially Silver compounds are toxic to bacteria, algae, and fungi in vitro. Among the elements that have this effect, Colloidal Silver is the least toxic for humans.

Prescription antibiotics used to fight infections kill bacteria indiscriminately, including the friendly bacteria that keep fungi such as Candida Albicans in check. Two popular and natural means to rid the body of a fungal infections are to change the body’s PH through diet, or to treat the affected area either topically or internally with Colloidal Silver at the correct dose.
An untreated, internal fungal infection in the intestinal tract can build up to levels that eventually enter and invade the blood stream. This eventually becomes leaky gut syndrome. The yeast can grow long roots into the lining of the intestinal wall, allowing access to the bloodstream. This can often lead to a compromised immune system that provokes other illnesses. The fungal infection produces microscopic barb-like hooks, called rhizoids, that cut into tissue causing irritation around the infected area. 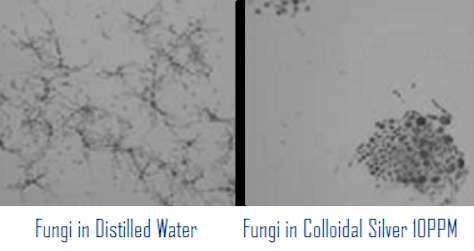 Treating skin diseases topically, i.e. applying Colloidal Silver directly to the skins surface, can be safely done without the worry of adverse side effects, other than dryness of the skin which is easily treated with emollients. Recommended applications for treating a fungal infection of the skin is to apply two to three times per day until the symptoms subside. Internally, Colloidal Silver dosage should be small at first, 10ml twice a day for 3 days followed by 20ml twice a day for 7 days.

It should be noted that when a person begins treating fungal infection’s internally, the release of toxic waste by the abundant dying fungus can cause a person to feel initially worse. This is referred to as Candida die off. For this reason it is suggested to begin treating the internal infection gradually at first. This is to keep the waste substances to a level that are manageable for the body to expel as fast as they build up. People who use Colloidal Silver topically, regularly report that it will cure athlete’s foot, vaginal infections, and skin fungal infections. However, if these Candida symptoms reoccur, it may be a sign of an internal fungal infection rather than just a topical fungal infection.